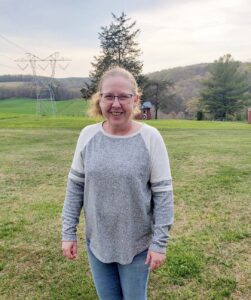 Senior Title Processor Deanna Ribero is approaching 25 years in the title industry. It’s no secret that she knows how to get things done.

She loves solving problems but also knows that the greatest accomplishment is closing a settlement with no stress and no snags. We can all relate to that.

Deanna recently became a grandmother, but since her new grandbaby lives in South Africa, there’s a lot of FaceTime involved. So instead she enjoys spoiling her four fur-babies.

Check out the Q&A to learn more about Deanna and read to the bottom for her special recipes for delicious doggie birthday cake and treats!

Would you consider yourself an early bird or a night owl?

An early bird. I get up around 6:30, I take the dogs out and feed the dogs. Then I get myself together and try to be online by 8:30 at the latest.

I have four dogs. Two black labs, Diesel and Mia. They are both four years old. They are seven Then I have a Boston Terrier named Gooch and an Italian greyhound that we just got last year named Buddy.

When you were a kid, what did you want to be when you grew up?
I want to say it was a teacher. I’ve always liked the younger kids, the little toddler-sized. The older ones? I can’t deal with those ones. Haha.

I became a grandmom in July. My oldest daughter lives in South Africa and she’s the one who had the baby. So I get to see him on What’s App.

What was a trip or a place that changed you?

Maybe Myrtle Beach. I’ve been there several times. I just like it. It’s relaxing. It’s cool down there. It’s not busy, busy, busy. You’ve got the main part of Myrtle Beach and then you’ve got the outskirts. That part is all the laid-back stuff.

What’s your most used or secret productivity hack?

I’ve got these seller letters. I have them and I keep them in front of me. I put them in order by closing date. That’s how I go through and try to do my actions and clear the file so that I can get in to do the binder.

Once everything is ordered, I put them in a pile, as they start to go to closing, I pull them back out and go through and make sure they have everything. I guess you could say that’s my organization.

What’s something that energizes you at work?

I like problem-solving, trying to figure out different things. Once I get into that, it takes up a lot of my time because then I start searching everything.

What work-related accomplishment are you most proud of?

I think just getting a settlement to go to closing and have everything go smoothly and well is an accomplishment.

Do you cook and, if so, what’s your favorite recipe?
My favorite recipe would be, I would say … I make this smoked sausage with peppers and onions and zucchini. I make that a lot. … That and I bake my dogs birthday cakes. I make them all homemade treats. The only thing they get normally is their regular dog food. Their treats, I try to do all-natural stuff. 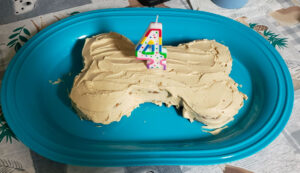 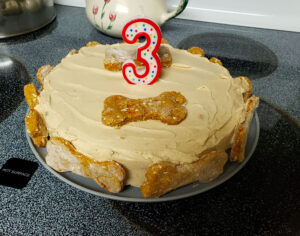 Want to spoil your dog like Deanna spoils hers? Check out her favorite recipes for doggie birthday cake and blueberry dog treats!